PlayStation has finally revealed the PS5 controller to the world, and it's officially called the DualSense.

Sony revealed the new PS5 controller design in a post to the PlayStation Blog, sharing the first images of the design as well as the first official word on what new features it will include. As you might have already guessed from the name, this time the big focus is on your sense - specifically the sense of touch. 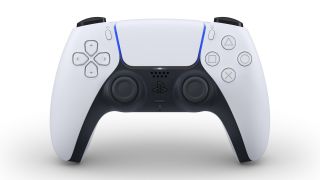 The DualSense Controller builds in refined haptic feedback to capture a broader range of motions, such as "slow grittiness of driving a car through mud". It also includes adaptive trigger buttons that can dynamically change their tension for different activities, such as drawing back a bowstring. You can also use a built-in microphone to talk to friends without needing a headset.

Sony, via PlayStation product manage Toshimasa Aoki, has also confirmed that the controller does include a headphone jack for connecting gaming headsets and other audio devices to the gamepad, following concerns from those who couldn't appear to identify the port in the first set of official photos.

Looking at the official renders, the light bar surrounds the touch pad and, critically, is player-facing. And although it looks like it wraps around the top side of the new touch pad, according to the renders released in the official post the light doesn’t appear to illuminate along the top of the controller.

Sony has confirmed that the current PSVR will be compatible with PS5, but unless the company makes significant changes to the way PSVR works, you may need to keep hold of your PS4 controllers to make it work.

It was a surprising move for Sony to release the DualShock 4 Back Button attachment in 2019 – a significant hardware development for a seven-year-old console that’s about to be superseded.

Sony has gone for a unique and rather bold two-toned design for its controller, and if this says anything about its design philosophy for the next generation, we might see a similar design for the console itself.

Can I use my ps4 account on ps5?
How much cost ps5?
Spider-Man PS5 leak reveals story details, game play and release window